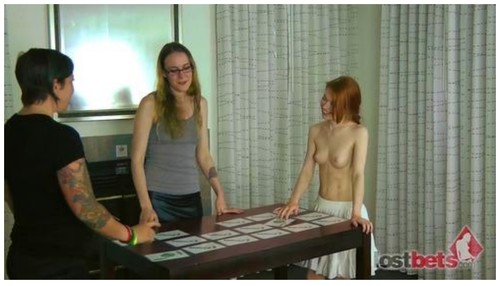 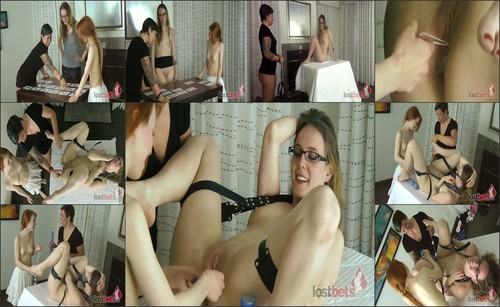 Description:
In this game of Strip Memory, the loser will be restrained while the winners play with her body using a few toys, including a wand massager and (and this is the fun part) a set of Ben-Wa balls.
Since this is Strip Memory, and that can take awhile with three players, they each only get three pieces of clothing. Dolly and Nettle choose to go braless, while Tobi goes commando, with no panties under her shorts. When a match is made, the winner strips the loser, who then has to do a twirl.
Dolly still has some red marks on her skin from being the target in Episode 483. That&amps what pale redhead skin will do. Also by the way, when one girl loses her panties before her skirt, the others make her hike it up to reveal her intimate charms beneath. The game lasts about 7 minutes, and at the end, it&amps on to the forfeit.
First, the winners put the loser in a thighbinder. This is a strap which goes around both thighs and behind the neck, leaving the hapless victim totally exposed. And then the winners get to play with the loser&amps bare pussy using the Ben-Wa balls. (The loser has never done this before, and is understandably apprehensive.) One winner pushes two balls inside her, then the other winner pushes in the other two. This isn&ampt enough for them, however, and they want to play some more. So they pull them back out, each one making an audible pop as it exits her vajj, then they go back in, again audibly as you can hear the balls clack inside the loser. One winner pushes her thumb into the loser&amps pussy to see how far she can get the balls in. (Pretty far, it turns out.) She then pulls them out again while ordering the loser to clench and try to resist and hold onto the balls. It doesn&ampt work, and the loser squirms as the winners experiment with different ways of putting the balls in and taking them out. Despite the humiliation of being used as a playtoy, the loser can&ampt help but get wetter and wetter as the winners jiggle the Ben-Wa string while pulling on it. The loser compares the sensation to a Sybian ride.
The balls get increasingly slippery as they&ampre coated with the loser&amps juices. The winners decide that the loser&amps pussy can easily accommodate four balls and they want to know the total volume. Fortunately, we had another string of balls handy, which the winners got, along with a vibrator for good measure. They insert both strings of balls simultaneously, alternating strings each time, but can only fit a total of 6 balls. That&amps okay, though, because now it&amps time for the vibrator, which makes the balls rattle inside the loser causing her to gasp. But at this point they find that the thighbinder wasn&ampt properly deployed (bondage is not their strong suit) and the loser has some liberty to move her legs, so one winner uses her back to wedge the loser&amps legs open so they can keep playing. Each time the balls go in or come out, the loser gasps. The vibe is turned up, and the loser&amps breathing becomes ragged. The vibe is turned up again and she starts to moan. The loser beings giggling uncontrollably as she&amps brought closer and closer to orgasm, and her veins stand out on her forehead as she quietly cums.
Model: