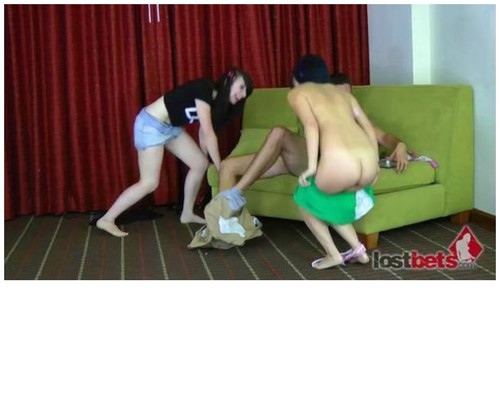 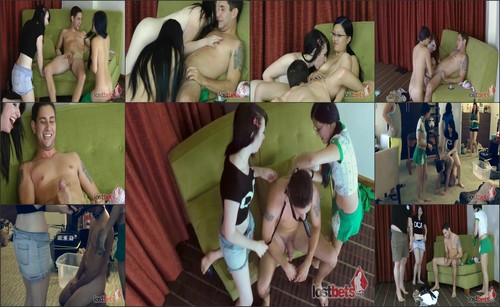 Description:
Magnitude is a game of forced orgasms. Three players, two of whom are trying to force the third to cum while she tries desperately to avoid it. Each round, the players pop a plastic bubble with a three-sided , and the player whose number comes up is targeted by the other two for sexual stimulation until time runs out. Today, for the first time ever, we introduce a male player to the mix. Whenever Brads in the hot seat, Dakota and Mina use their hands and their mouths to try to make him pop. Whoever cums first gets humiliated: not only by being forced to an involuntary orgasm but by what comes after. The loser has a dildo-gag strapped to their face and a leash put around their neck. The loser is led out of the hotel suite and down the hallway to another room where a bunch of our friends happened to be staying. Kym, Catherine and her boyfriend, Sharron, and a few random folks were all there to enjoy the losers naked, gagged, and leashed humiliation, taking pictures with their phones.
Model:
Dakota, Tobi, Sinn, Penny, Brad, Mina
Studio:
Lostbetsgames.com
Info:
File Name : LostBets-450-Strip-Magnitude-with-Dakota-Brad-and-Mina-HD.mp4
File Size : 430.62 MB
Resolution : 1280x720
Duration : 00:19:05